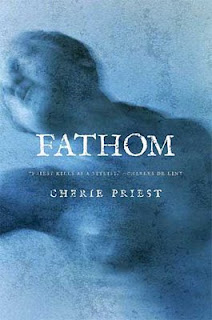 
The latest novel from Cherie Priest is a break from her three previous Eden Moore southern gothic tales of the supernatural set in eastern Tennessee. Fathom brings the action farther south, deep into Florida and set back in the 1930’s. I want to include Cherie Priest’s description for Fathom because it is far more intriguing and interesting than what I could come up with:

Basically, this is a story about an ageless water elemental with a plot to bring old gods back to glory, and exterminate the human race while she's at it. But humanity has a few surprise allies hidden between the cracks, including a decomposing patron of the earth and his minion -- a girl who was saved from certain death by being turned to stone.

Anyway, there you have it. Sea monsters, pirates, teenaged girls turned into stone, and a plot to destroy the world in order to replace it with something stranger, and worse. It's water and fire, myth and mystery. It's urban legend (rural legend?) with a dash of the archetypal and terrible.

See? Who wouldn’t want to read that? Even had I not read and loved her three Eden Moore novels, that’s a good tease for Fathom.

When a writer who has only published one particular series decides to write a completely unrelated novel there is a bit of a risk for the reader. What if the writer can only do the one thing really well and the new novel isn’t nearly as good? This is a valid fear for a reader. After all, who has time for crappy novels? Outside of the limited edition Dreadful Skin, Fathom marks Cherie Priest’s first venture outside the world of Eden Moore. Should the reader fear?

Fathom is the story of Bernice and Nia, cousins who become far more when an act of violence (plus a water witch and an earth monster) remakes each girl into something both more and less than human. Both the water witch and the earth monster (for lack of better terms) changed the girls for their own purposes and they set the girls on an inevitable path of conflict. One girl to destroy the world, the other to save it.

When I wrote up my list of the best novels published in 2008 I left a spot for the really great novel which I just didn’t have the chance to read in 2008. I know there is another novel I am reading right now which also deserves a spot on the list, but there is no question that Fathom is one of the ten best novels published in 2008. As good as Not Flesh Nor Feathers was (and it was really, really good), Fathom is just as good. If you’re not reading Cherie Priest, you should be.