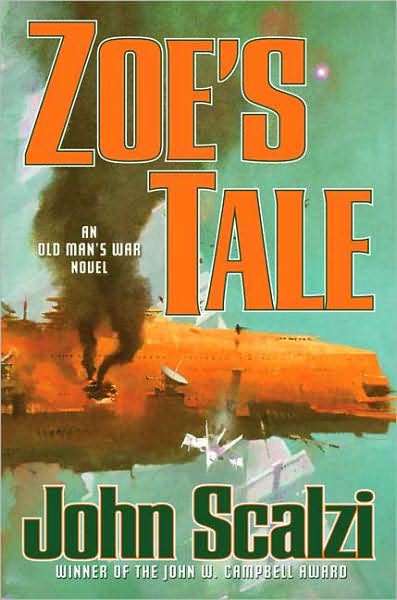 
I went through a number of different thoughts / opinions regarding Zoe’s Tale in the year between when I first heard the announcement for the novel and when I finally read the novel. First thoughts were simple excitement / happiness that John Scalzi had another Old Man’s War story to tell. Then, when I realized it was a companion novel to The Last Colony, just told from the perspective of Zoe, the excitement lessened and the skepticism increased. Yeah, Scalzi’s a heck of a writer and his easy-flowing storytelling makes pretty much anything he writes entertaining, but I wasn’t sure that –that- was the story that needed to be told. Obviously, this isn’t something I have a say in, but I wasn’t exactly clamoring for more Last Colony. He told the story already. Once is generally enough. Orson Scott Card tried that trick with Ender’s Shadow and the result was a novel that undercut the strength of Ender’s Game and ultimately wasn’t nearly as good as the original. The reviews for Zoe’s Tale have been fairly positive so far and increased my expectation / hope that the novel would be successful and good on its own as well as stand as a companion novel to The Last Colony.

For those who do not know the basic plot of The Last Colony (and in turn, Zoe’s Tale), the story here follows Zoe Boutin-Perry, the adopted daughter of John Perry and Jane Sagan (the protagonists of the first three novels) as Perry and Sagan are tapped to leave their adopted homeworld of Huckleberry and lead a new colony about to start out to the world of Roanoke, an ill-omened name for a planet / colony if there ever was one. The name is apt (and chosen for a reason) as is made clear when the ship arrives at the wrong planet and only then are the colonists (including Perry, Sagan, and the crew of the shuttle) informed that the Colonial Union deliberately changed the course for the protection of the colony. Zoe’s Tale hits all the plot high-spots of The Last Colony, but Zoe’s Tale is its own novel that only depends on The Last Colony for the basic structure of events that the reader knows has to happen.

Zoe’s Tale works very well on its own.

The first thing to note is that, from my limited perspective, Scalzi nails the narration / character of Zoe. Zoe walks and talks like any intelligent yet smart mouthed sixteen year old girl, or at least how I would imagine one should talk like. From the introduction Scalzi makes mention that he did vet the writing of Zoe through a number of different women who were all, presumably, sixteen year old girls at one time. It shows. Yes, Zoe is a younger version of John Perry (or any number of witty Scalzi-penned characters), but she plays well as her own character and appropriate to her age. She is, of course, quite capable in her own right. There is some growth for the character as Zoe does not step right onto the scene able to do everything that the adults can do, and she expresses her fears and deficiencies in ways that adults might not and as Jane Sagan (for example), never would. There are a couple of moments near the end of the novel where Zoe steps a little too precocious and does a couple of things that should potentially be beyond a sixteen or seventeen year old girl. Or boy, for that matter, but the teenaged boys in Zoe’s Tale tend to be less competent and mature than the girls – also an accurate characterization from John Scalzi. This bit of “special-ness” in Zoe’s handling of some of the events of the ending has been foreshadowed a bit in her behaviors with the boys as well as the simple knowledge of who she is, how the Obin race views her (explained early in the novel) and the understanding that a child raised by John Perry and Jane Sagan should be expected to be more competent than the average sixteen or seventeen year old. Still, even granting a history of young-adult precociousness in both the science fiction and fantasy genres, Zoe’s actions at the end of the novel still come across as a bit too accomplished. Zoe’s follow-up reactions to those actions, however, are perfect.

Besides the character of Zoe, on which the success of the novel ultimately rests, the story of Zoe’s Tale is worth briefly thinking about. Basically, a companion novel which takes place during the same timeframe as The Last Colony would be expected to feel well-worn and potentially overstay its welcome early on. Somehow John Scalzi avoids this. Perhaps it is because I have not read or thought about The Last Colony since late May 2007, but Zoe’s Tale felt fresh. Sure, expected plot points will still occur (the true story of Roanoke, the “werewolves”, the disappointment at not being able to use electronic technology, the video of a slaughter, etc), but by whatever stroke of skill or luck (I’m banking on skill), through the very different viewpoint of Zoe, John Scalzi wrote a more interesting, more exciting, and stronger novel than The Last Colony was.

Not only does Zoe’s Tale serve as an alternate entrance point for readers just discovering John Scalzi and the Old Man’s War Universe, it is a heck of a novel in its own right and like Mike Resnick’s Starship series, Zoe’s Tale would be an excellent novel to hand someone who has never read science fiction before. Zoe’s Tale would be a great introduction to the genre and is flat out fun to read.