The Born Queen, by Greg Keyes 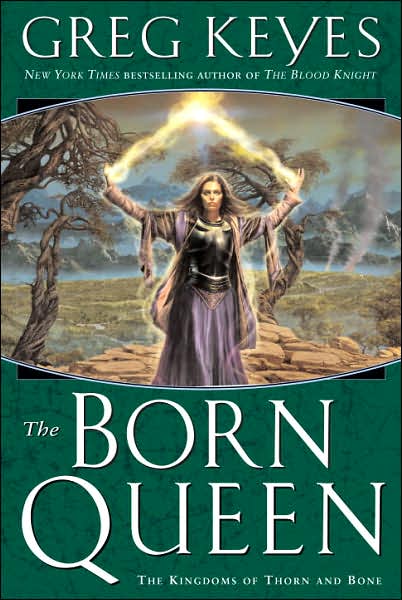 Attempting to describe the overall plot of The Born Queen and catching the reader up on where every major character is and what they are doing would be an exercise in futility. Here's what you do need to know: Anne Dare is on the throne of Crotheny and is showing fae powers. She attempts to consolidate her power and strikes back at the corrupt Church. This, of course, leads to open war, not only with the Church but with Hansa to the North. Hansa is a staunch ally of the Church. This is the primary thread of The Born Queen.

Other threads have to do with the composer Loeff, who helped break the law of death, with Aspar the Holter who is doing something somewhere, with Cazio - Anne's sworn swordsman, with Anne's mother. Together, and with other threads, Greg Keyes weaves a tale that despite being told two years after The Blood Knight, is easier for the reader to pick up and figure out who is who and what is what.

The Kingdoms of Thorn and Bone have flown in under the radar of higher profile fantasy series (A Song of Ice and Fire, The Gentlemen Bastards, etc) and on one hand, that is entirely fair. These four novels (starting with The Briar King) do somehow come across as less exciting, less essential than George Martin, Scott Lynch, Joe Abercrombie, Matthew Stover and other practitioners of high fantasy today (and yes, Stover is doing something different, but at least half of the Caine novels are traditional fantasy). Still, The Kingdoms of Thorn and Bone are good. They are solid. They are consistent in quality.

But what about The Born Queen? Next to The Briar King, this is the second most satisfying novel in the quartet. Anne is a strong character and her new powers (and the throne) change her, almost unrecognizably. Besides the knowledge that this is the concluding volume of the series, there is a sense that things are finally moving to a head, to some large confrontation. What is unclear is who the players are. How Leoff will impact the larger scheme (though he had a major role with his music in the last book), if Cazio will take center stage, how Aspar will come back to the rest of the primary story, if war will be averted, if Anne will remain human. There's a lot going on, but somehow Greg Keyes is able to make ALL of this feel immediate, wrap up the book in a satisfying way, and wrap up the series in a manner that makes sense and does not disappoint or betray all that came before (I'm looking at you, Tad Williams). There are several large set pieces in the novel (though not quite like the storming of the castle in the previous volume), and one crazy final battle, but with Keyes, it all works.

The Born Queen reminded me why I like Greg Keyes so much. Excellent storytelling from a man who knows what he is doing and how to do it. Some set-backs in the previous two volumes are completely erased here.

And if you don't believe me, check out Rob's review. He'll set you straight.
Posted by Joe on Thursday, October 02, 2008
Email ThisBlogThis!Share to TwitterShare to FacebookShare to Pinterest
Labels: Greg Keyes, The Born Queen, The Kingdoms of Thorn and Bone

Glad you liked the book and thanks for the review. The Blood Knight was a little weak compared to the other four.

Rob: Thinking back, I think that's my impression as well. I thought it was mostly fine when I read it (according to my review), but it doesn't hold up well in retrospect.

The Born Queen, on the other hand, delivered everything I possibly wanted from Keyes.

Wonder what he's going to do next.