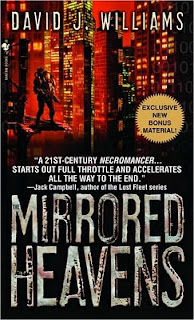 With blurbs from Jack Campbell and Peter Watts calling out how exciting, frantic, and action packed The Mirrored Heavens is, expectations are raised for the sort of debut novel this is from David J. Williams. From one perspective, they are correct. The actual action of the narrative kicks in to high gear at the start and remains an “action packed” novel through the end, with interludes of explanation between the ass-kicking and the cyber-battles. It would probably make a great action movie if you cut down on the exposition. The problem is that The Mirrored Heavens does not read like a kick-ass fast paced novel. It just doesn’t.


David J. Williams imagines a 22nd Century where the political lines and balances of power are redrawn after a century of various conflicts over energy and the environment have left the globe in another Cold War. With the destruction of a Joint US / Eurasia Space Elevator, several teams of Special-Op agents are dispatched to do…something. Williams is always clear that the various agents are fighting for their lives and fighting to complete a mission, but it is seldom clear as to exactly what that mission is. The characters themselves are ciphers. Bits of background on them are leaked out, but even those tidbits are not reliably factual. One of the primary characters is identified in the text as The Operative, which is as honest of an identity as the reader is likely to get. The Operative is named by other characters, but remains The Operative when referred to by the narrator.


Conspiracies abound at the highest levels and Williams generously peppers The Mirrored Heavens with explosions, physical conflict, and massive destruction and loss of life. It is everything a fellow should want out of a novel, except that something is lacking in the execution. The narrative fails to drive the reader along and the constant action comes across as flat, lifeless, and unengaging. Because the characters involved are so empty, the reader will likely struggle to engage with them or care about what happens. The impact of this is most strongly felt in the ending, which throws a strong twist on the novel and on the direction of the Autumn Rain trilogy. The ending is the sort that should, to commit cliché, “blow the mind of the reader”. It doesn’t. The ending does intrigue enough for the reader to potentially pick up The Burning Skies to see what happens next, but it isn’t a priority. It’s easy enough to forget.


What works is the revelations of the political interplay that forms the background of the conflict. There just is not enough of it to prop up the story. This is a story that is more conceptually interesting than it is one to recommend. The Mirrored Heavens is a novel that promises quite a bit, but fails to deliver on much of it.


For a rather excellent and positive review, check this one out.  I don't agree, but it is well argued.
Posted by Joe on Monday, August 09, 2010
Email ThisBlogThis!Share to TwitterShare to FacebookShare to Pinterest
Labels: David J. Williams

I liked the Burning Skies better and while it's just as fast-paced, I thought you get to know the characters a bit better. Still so fast it's probably too fast. Loved the action though.

Thanks for recommending and linking to my post on The Mirrored Heavens, Joe!

You note something that I've seen in many reviews, namely that the characters are "empty" and so difficult for the reader to identify with. True, the novel doesn't provide much background for the main characters, especially as it has them constantly swept up in the action of the moment. Yet I found that I was wholly engrossed by what they were as opposed to who they were, although the latter becomes steadily more intriguing in the novel's final stages (particularly with Haskell, Carson, and Spencer).

I think part of the key might be something that you mention, actually: how much of the information learned by the characters, about themselves and/or their situations, is not always "reliably factual." What Williams attempts in the novel is a tricky balancing act, in a way, even a kind of gambit. Narrative momentum relies so much on things happening now, the characters -- let alone readers -- have little time for reflection or flashbacks or tangents. I found this gambit to be successful, because the form is (ahem) mirroring the content/action, yet I can also see why Williams' gambit might not work for some readers.

I'm curious, what did you find especially "conceptually interesting" about the novel? I also wonder why, say, conceptual interest could not constitute grounds for recommending a (or this) novel?

Re: Conceptual interest. For me, that's something to get me in the door. Not to keep me there. It's probably a more polite way to say "well, it was a great idea, but..."

I like how the world was set up, the political changes and infighting, the uneasy detente that was about to be shattered. But, I didn't really engage with the stuff that connected all that. The stuff I liked wasn't the story. The story was the three primary characters - the ones who were representative players with limited identities.

I can, mostly, see why folks may appreciate the novel. I just didn't.