Skinny Dipping in the Lake of the Dead, by Alan DeNiro 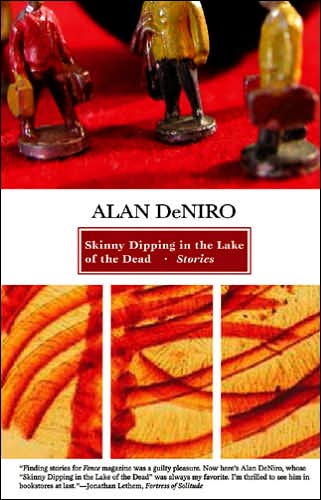 Alan DeNiro's debut collection of short stories, Skinny Dipping in the Lake of the Dead, is everything that I hoped Jeffrey Ford's stories would be and weren't. The stories vary in length from very short (The Exchanges which is a weird exercising in changing identities ) to a longer story (the title story).

What I like best about this collection is how DeNiro takes ordinary every day settings and twists it just enough that an average everyday person is caught up in the middle of something extraordinary. In "Salting the Map" a guy gets a job for a map making company and is asked to salt the maps with fictitious cities and this act of salting is an act of creation. "Our Byzantium" has the Byzantium empire invading modern day America. "Fuming Woman" has a circus performer with real power. "Child Assassin" is set in today's world with a hired assassin who kills people's babies. What if a family of giants move in next door? "The Friendly Giants" addresses this.

All of DeNiro's stories have this sense of the quirky and there is far more pleasure in reading something out of the ordinary than there is in the high literary style of Jeffrey Ford (not that Ford does not have merit). Skinny Dipping in the Lake of the Dead was published in 2006 and hopefully DeNiro has a second collection brewing because it will be my most anticipated collection of the year for whichever year it is announced.

Finally, Alan DeNiro has this to say about his fiction.

One of these days my big plan is to construct a Moral Majority table for my fiction–a reading guide for the faint of heart that will signpost all of the salacious parts of my fiction. Until then, just assume that a lot of bad shit happens in these stories. But some redemptive shit, too. Arkansas poet Frank Stanford once said that “Sometimes art is like a beautiful, sick dog that shits all over the house.” And…yeah. Exactly.