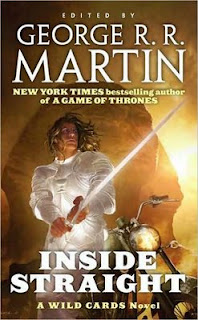 If this is your first time, welcome to Wild Cards. If you’ve been here before, welcome back to Wild Cards. Inside Straight is the eighteenth volume in the long running series. If you’ve never read anything in the Wild Cards universe before, don’t worry. Don’t feel intimidated because there is no need to go back and read the first seventeen novels before you read Inside Straight. New readers can just right into Inside Straight and understand everything about the story without having read a single previous volume. This is a perfect place to start your Wild Cards experience. Long time readers will be rewarded with side references to long familiar characters and events but new readers will not feel lost.

Consider this to be Wild Cards: The Next Generation.

A little background: in 1959 an alien virus was unleashed on Earth. Those infected had a 90% mortality rate. It is said they drew the Black Queen. 9 out of 10 survivors developed a wide range of physical abnormalities and were called Jokers. Jokers tended to be shunned and ended up living in enclaves within major cities. The most famous of those was called Jokertown and was in New York City. That lucky 1% of all victims of the Wild Card virus developed a wide range of super powers. They are called Aces.

What makes Wild Cards different than other superhero stories is that the people who become Aces are just that, people. They have the same base desires or potential for heroism than any average person already contains within. Some did become heroes, some criminals, and some are just regular folk going about their business without getting too involved in the world at large. That was 1959. The intervening decades wrought social and political changes both great and small. The Brooklyn Dodgers never left New York. Fidel Castro played major league baseball and never became a dictator. A character introduced in Aces Abroad (book 4) is assassinated at the beginning of Inside Straight after uniting nearly the entire Arab world as one nation, the Caliphate.

By the time Inside Straight rolls around, Aces and Jokers are old hat. There are two generations who have never known anything but the transformed world with Aces, Jokers, and the Black Queen. There is a decreasing number of people who were even alive when the virus was unleashed.

That’s the background to Inside Straight and much of this is revealed in little pieces for the new reader. Again, this is a perfect entry point to the series.

The assassination at the opening of the novel is a major plot point, but it does not really come up again until midway through Inside Straight. The first half of the novel introduces a new set of Aces to the reader through a reality tv show: American Hero.

The first thought of many readers might be to groan at the idea of a reality show based around Aces competing against each other, but let’s be realistic. Though the introduction of the virus caused certain events and situations to change, overall the world follows basically the same path – and that includes the rise of reality television. In such a world, of course there would be a reality show based around a superhero competition. There’s probably also some shlocky FOX show regarding marrying a Joker, but that’s not this book. Happily.

It’s a perfect way to introduce the major characters and give background on some minor ones. The first half of the novel introduces the characters and reality program, shows some competition and the backstories of a handful of characters, and does an excellent job in rebooting the Wild Cards franchise without once contradicting or erasing anything that happened in the past. These are new characters with new lives and they are getting on with their business. Some are shallow, some are misunderstood, some are morally solid, and some are not. Just like regular people. Regular people who just happen to have superpowers.

The second half of the novel begins to return to fallout of the assassination and draws in some of the new characters we’ve been introduced to.

The other thing to note about Inside Straight (and the franchise as a whole) is that this is considered a mosaic novel. It has a variety of authors writing their own stories which all build to a coherent whole. It provides different perspectives on the characters and the story.

These aren’t the characters longtime readers of the series know and love, but there are appearances by Peregrine and The Golden Boy, as well as references to Jetboy, The Turtle, Fortunado, and others. This is actually part what makes Inside Straight work so well. The novel is self contained but feels like it is a part of a much larger world with characters who have their own lives and may not intersect with these characters, but we know they’re out there.

For what it’s worth, my favorite character is The Amazing Bubbles. Thanks to Caroline Spector for that. Earth Witch a solid #2.