As I do almost every day I checked my library's website to see what new books they have coming up that I can reserve. This is why I generally have 40 books on reserve at any given time and every time I make a serious effort to work down my number of holds it grows right back up again.

This morning I saw two (well, three) books I did not expect.

First, Natural Ordermage by L. E. Modesitt, Jr, coming out this September. Now, last time I checked Modesitt's next novel was to be Mage-Guard of Hamor. I'm not sure what happened, but the timeline has switched. I think Mage-Guard is still forthcoming, but...huh. I'm not excited, but I'm interested because I generally enjoy Modesitt's work.

Second: Dreamsongs: Volumes 1 and 2, by George R. R. Martin. George Martin has this to say on his website: 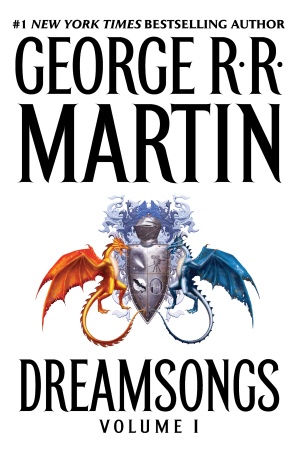 DREAMSONGS was originally published in 2003 by Subterranean Press as GRRM: A RRetrospective. The collection features half a million words of short fiction, teleplays, essays, and autobiography, along with an introduction by Gardner Dozois and a bibliographical checklist by Leslie Kay Swigart. SF, fantasy, and horror, a Twilight Zone script and my famous busted pilot Doorways, Haviland Tuf and Wild Cards, Hugo winners, Nebula winners, a Bram Stoker winner and a World Fantasy Award winner, and lots of losers too... DREAMSONGS has it all.


I've been looking forward to reading the RRetrospective for some time now and the Subterranean edition has been hard to come by, so this one I'm excited for! Good stuff!
Posted by Joe on Tuesday, May 22, 2007
Email ThisBlogThis!Share to TwitterShare to FacebookShare to Pinterest