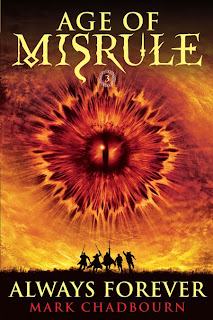 With Always Forever, Mark Chadbourn brings his Age of Misrule trilogy to a close. After the previous two volumes, Chadbourn has left his heroes with just a shred of hope that victory might yet be possible, or if not hope, with just enough pluck to keep fighting the good fight. Either way, both World’s End and Darkest Hour ended on down notes of defeat snatched from the jaws of victory.

With Shavi dead at the end of Darkest Hour, and Laura impregnated with the dark god Balor and in captivity, Jack Churchill and the Brothers and Sisters of the Dragon are nearly broken. They failed. Again. Always Forever is their last ditch assault on the Fomorii and their attempt to ally themselves with the Tuatha de Danaan before all hope really is lost and Balor destroys the world. This small group is the only hope humanity has to not be crushed into nothingness by Balor OR to lose themselves to the Tuatha. Their mystical heritage and great hearts is the one shot to defeat all of faerie.

Chadbourn relies perhaps too much on the mythology of faerie and not enough on the story itself. Contrast the Age of Misrule trilogy with the four volumes of Elizabeth Bear’s Promethean Age and it is clear that Chadbourn is far weaker in characterization and his use of the tropes and mythology of faerie comes across as far more forced than it should in a trilogy of this potential. Much of Chadbourn’s use of the faerie is rather heavy handed.

If readers forget for a moment that Always Forever (and the trilogy as a whole) is set in a version of the real world, the novel (and trilogy) reads as a fairly standard quest fantasy. The characters hop from place to place working towards some nebulous objective, one which they barely understand and only Thomas the Rhymer seems to know for sure. Guide or not, he’s not telling. He just points, from time to time.

This is where the heavy reliance on mythology comes in. Chadbourn takes the reader almost through a travelogue of the deeply symbolic historical sites of England. There are brief wonderings of what might be happening in the rest of the world, but the fight is located solely in England. There is a strong emphasis on the travel, of discovery and “unlocking the long dormant power of the land”.

What Mark Chadbourn does well is built a story from the ground up, steep it in darkness, place the characters in perpetual danger and most importantly, have the outcome be in serious doubt. There is no promise that the heroes will win the day, or that if they do, any of them will survive to see the victory. While few of the characters are truly likeable, they are just interesting enough for the reader to want to know what happens to them and care enough to continue on and find out.

All this paints a more negative picture of Always Forever than the novel deserves. This isn't a bad book. It's just that the flaws of the novel and the series weigh heavier on the mind than the strengths. Always Forever closes out a solid, though not spectacular, fantasy trilogy. The Age of Misrule did not live up to the hype of being one of the best trilogies of the year, but Chadbourn did succeed in telling a dark story with the world in peril and doing it with a certain amount of style. Each volume of the Age of Misrule had a consistent level of quality. There was no weak link here, but in retrospect, no standout. Many readers will be satisfied with Mark Chadbourn’s storytelling. It’s strong, and fans of the first two novels should be satisfied. The novel mostly ends well and it clears up some niggling loose ends, but while Always Forever delivers everything promised from the first two novels, the reader is as likely to be tired of the near ceaseless bickering from the characters and may be ready for the whole thing to be over. Just for it to be over.

This is still more negative than the novel truly merits, but perhaps there is something to be said for the fact that the flaws of the novel stand out more sharply than the strengths.

Yes, I quite agree. Whilst I'm enjoying the books I am constantly irritated by Laura and Veitch, two totally obnoxious characters.

In reality no one would put up with their nastyness and reading it does sometimes set my teeth on edge.

Still, they are by and large entertaining and I have been following their exploits on Google Earth. The books are indeed a travelogue of Britain.